Our youth are more passionate about defence forces nowdays. But they have no clue about the selection process and eligibility criteria. Although we have written an article for Indian Army eligibility criteria but it doesn’t contain all the details and detailed knowledge about “how to join Indian army after 10th, 12th and Graduation”.

WhatsApp us for Information regarding Indian army –

How to Join Indian Army After 10th, 12th And Graduation Easy Way

See, only these three are the ways of joining Indian army. We will discuss about each one of them and will focus on How to join Indian army after 10th, 12th and after graduation.

One basic question that always strikes every candidate’s mind is, what is the maximum and minimum age limit for joining Indian army?

Will this factor of recruitment process affect you. And if you want to join Indian army after graduation, then will you be eligible for Indian army according to your age.

Most of us pass our intermediate by 18 years of age, and then go for graduation courses, but as Age limit for GD is Just 17 years 6 months to 21 years old.

And you will complete your 21 years of age till the time you complete your graduation, then how can it will be possible to join Indian army as a GD soldier. To know each point and clear every doubt you can read the post below.

Read about these three ways below. We have describe these ways. And then apply for Indian army according to your qualification.

How to Join Indian Army After 10th Pass

You can become GD Soldier, Cook, Driver, these are basic if you have class 10th certificate and you want to become technical soldier, SKT/clerk then you can’t become.

There are easy and equal Steps to Join Indian army for class 10th, class 12th and graduate. But main thing is what can you become after 10th pass with 40% aggregate.

We are giving more details in this article but somehow it doesn’t suits on every one so you can ask your query in our query box below.

How to Join Indian Army After 12th Pass

To become a soldier you can apply after 12th if you have done your class 12th. But there are more options for you now compare to class 10th pass.

Eligibility criteria expends for higher posts. These are not higher posts but you have good work field in Indian army like clerk and technical job.

Despite the pass class 12th with arts or commerce without maths can not become you technical soldier. So you must have maths and english for Soldier Technical and SKT/Clerk. 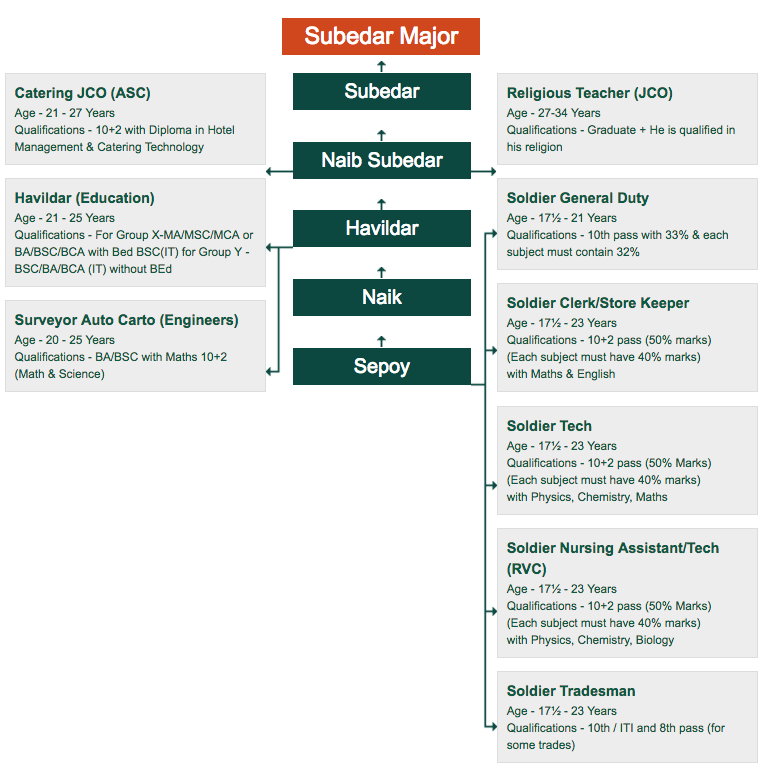 How to Join Indian Army After Graduation

After graduation you can join Indian army, And this will give you more benefits. How to Join Indian army After Graduation? Many candidates who have exceed age limit for GD, Clerk and Tradesman, can now apply for Indian. So age limit is not only factor which will stop you doing such things like joining Indian army.

What are the posts for Graduate candidates???

Most common query which pop up in each candidates mind and that is, what are the posts for graduation candidates or graduated candidates, what is age limit for graduate candidates and all. So check the posts name and list which suits your perfectly. 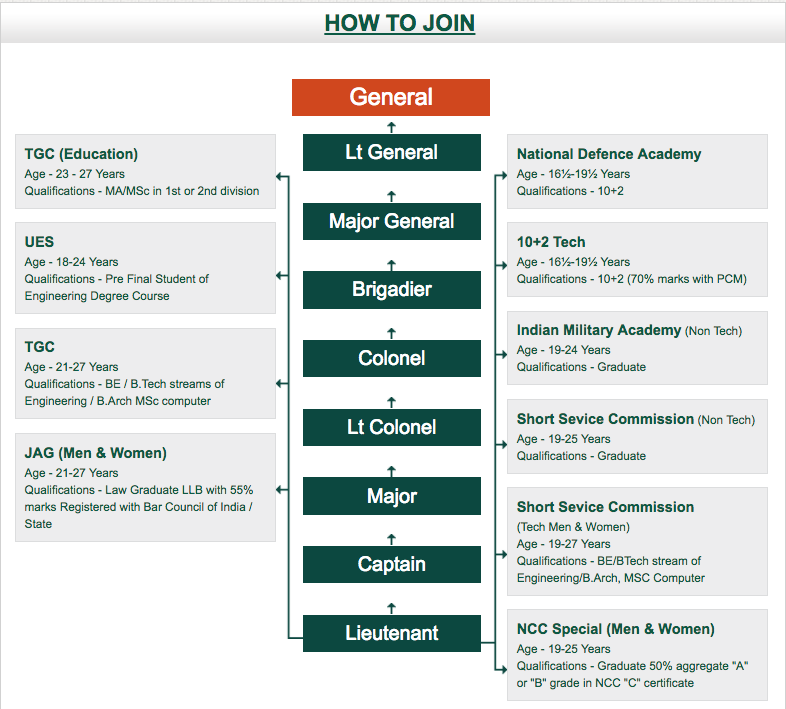 We hope now it’s clear that which post can you apply? Class 10th, class 12th and graduate candidate can apply for only given posts.

How to Join Indian Army?

Process to join Indian army is given in this section. So we will describe them into two separate section sections. First will be JCO/OR (Junior Commandant Officer/Other Ranks) and second will be for Officers.

Recruitment will be released Zone wise for each zone and states separately. So check Zone wise or state wise recruitment in the link given above.

Now Join Indian Army has changes it’s old rule. Each candidate who want to join Indian army has to register first. And then they can apply for Indian army by visiting the official website of Indian Army i.e., joinindianarmy.nic.in.

To register in Indian army, candidates need Aadhar card. Class 10th Pass certificate no. Valid email id and Mobile no. Most important thing is, each things should be correct in these things.

When you will register in Indian army database. Then you can check recruitment just by logging in. You will only be able to join Indian army after applying online and within the given time period.

On the day of Bharti rally, first test will be hight bar, and you can check Indian army height eligibility here. Then Second thing will be Race, 1.6km should be done with in. 5:45 min. But this depends upon the candidate running on that set. group 3 to 4 will be taken in each set. and number of candidates in each set might be 150 to 300.

This humber shows that this is one of the toughest phase of online Indian army recruitment for Soldier, Clerk/SKT, Soldier technical and Tradesman.

After qualifying the physical eligibility test, you would go for medical test.

Then Chest measurement, Push-ups and Chin ups will be done. After qualifying these rounds candidate have to clear, Medical test, Where hand, fingers, Teeth, feet, eyes and other body parts checked.

Within a month of written exam, result will be declared by Join Indian army. So you can check result for Indian army gd, clerk, soldier technical, and SKT/CLERK.

When you have qualified in medical test and written exam then you only have to wait for the merit list. Final merit list is the pass for Joining Indian army. If your name will be mentioned in merit list, it means you have selected for Indian army. And Very soon you will get joining letter.