IAS Collector Salary In India – In Hand Salary Per Month, UPSC is known as the toughest exam in our country. Lakhs of candidates appear every year after the notification is released, having a dream in their eyes of becoming an IAS Officer. Candidates work really hard for this exam, some of them leave their reputed jobs also just for the preparation of this exam, because the amount of satisfaction you get after becoming an IAS Officer, you can get it nowhere else. 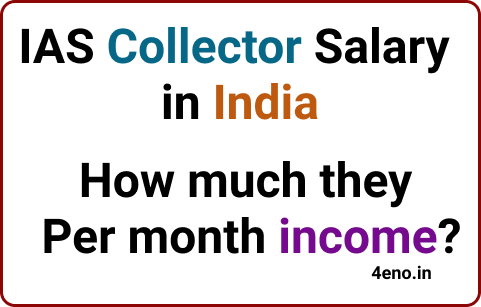 The post not only offers lucrative salary packages, but also provides you with additional benefits. You get to exercise a lot of powers after getting selected as an IAS Officer. The selection of a candidate is done in three stages – prelims, mains, and the final interview. As it is the toughest exam, so only a handful of candidates crack the exam and finally get recruited as an IAS Officer.

IAS Collector Salary In India – In Hand Salary Per Month

We all are aware that how much the youths of our country aspire to become an IAS Officer, and some of them creates history.

The reason for this ambition is not only salary, but it is also the respect that you get after getting appointed in this position, you enjoy it no where else. Here, we are providing you with the details about the perks and benefits that an IAS Officer gets along with the salary:

There are other benefits and allowances also which an IAS Officer gets along with the benefits provided above and those allowances include transport allowance, travel expenses, house help benefits, mobile bills, pension and retirement benefits.